Metformin, one of the most widely used anti-diabetes drugs in the world, probably extends lifespan. We won’t be completely sure of this until a few large trials on the anti-aging effect of metformin have been completed. Nevertheless, we are quite optimistic.

The main active substances in Galega officalalis are galegine, perhaps better known in chemistry as dimethyl-allylguanidine, and a number of biguanide analogues. Due to these substances, the plant is poisonous at a high intake. In the 1920s, Kayuki Watanabe, a Yale University chemist, accidentally discovered that biguanidines could lower glucose levels.[2]

A few years after Watanabe’s discovery the first antidiabetic biguanides hit the market. These preparations were not without side effects, as patients and their physicians noted almost immediately. The first generation biguanides could damage the liver and kidneys. It was not until the 1950s that Jean Sterne, a physician and professor of Clinical Pharmacology at the Hopital Laennec in Paris, discovered that there was a biguanide analogue that could combat diabetes with relatively few side effects. That was metformin.[3] Sterne called metformin ‘glucophage’ (glucose eater).[4]

The chemical structure of metformin is shown below. 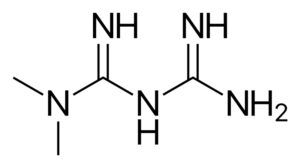 In the mid-1970s, metformin was introduced as an anti-diabetes drug in France. In the United States this happened after 1995, when the FDA approved metformin. Endocrinologists now regard metformin therapy as the preferred first-line pharmacological action against type-2 diabetes.[5]

Although the mechanism of action of metformin is still not fully elucidated, scientists believe that the anti-diabetic effect of metformin is mainly due to a reduction in glucose release by the liver. In addition, metformin reduces the absorption of glucose by the small intestine. The latter explains perhaps the most commonly reported side effects of metformin: nausea, stomach ache, cramps, flatulence and diarrhoea. Metformin is more commonly associated with gastrointestinal adverse effects than other antidiabetic drugs.[6]

These gastrointestinal side effects are relatively harmless, and can often be resolved by dividing the daily dose into several small doses per day or by taking the drug with food. A rare but more serious side effect is the accumulation of lactate to toxic levels. This lactic acidosis may occur when metformin is taken by patients with other conditions that may cause metabolic acidosis, like liver disease or alcoholism. Another risk factor is kidney disease, which results in a compromised renal excretion of metformin.

That in itself is already interesting, but animal studies have shown that the health-promoting properties of metformin may go even further. If you expose roundworms to metformin, the animals will live longer.[9]

In cells, metformin appears to alter the functioning of the mitochondria by inhibiting the transport of electrons. This reduces the activity of ATP and anabolic signaling molecules like mTOR that force cells to develop and grow. An important enzyme that inhibits metformin in mitochondria is glycerol-3-phosphate dehydrogenase. This enzyme is also involved in the formation of glucose. (Inhibition of this enzyme largely explains the antidiabetic activity of metformin.)

At the same time, the enzyme AMPK, which normally acts as a sensor for a state of deficient energy and nutrients, becomes more active. In turn, AMPK activates a spectrum of antioxidant and anti-inflammatory mechanisms.

A similar effect has been shown in experiments with mice.[10] Mice given metformin in the second half of their lives live 4-5 percent longer than normal. However, the length of time that the mice are plagued by an aging-related decline in their health throughout their lives is not increased by long-term administration of metformin. The increase in the life span equals the increase in the health span.

Incidentally, also in the case of the use of metformin as a longevity drug, the adage of ‘more is better’ is incorrect. Mice given ten times the optimal dose of metformin live 14 percent shorter than normal.

After the life-prolonging effect of metformin has been demonstrated in animal studies, fundamental scientists have extensively mapped all possible ways through which metformin could extend life. The figure below, taken from a review article by anti-aging researchers at the American Albert Einstein College of Medicine, summarizes all known metformin’s potential mechanisms of action on the molecular level.[11] 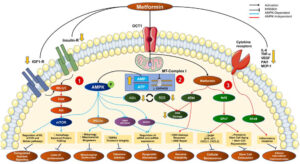 If there are so many indications that a relatively cheap, proven and safe drug can extend both the lifespan and the healthspan, it is obvious that anti-aging researchers will set up trials to answer the question whether metformin can also offset aging and extend lifespan.

One of those trials is the Metformin in Longevity Study (MILES), another Targeting Aging with Metformin (TAME).[12] In the latter study, three thousand Americans aged 65-79 will participate for 6 years. Researchers from the National Institutes of Health will determine the effect of metformin on mortality, but also on chronic diseases such as cardiovascular disease, cancer and dementia.

Expectations are high. Even doctors who still have reservations about the life-prolonging effect of metformin, keep open the possibility that metformin administration may extend the period of life spent in good health via its ability to reduce various diseases.[13]

It will be years before the results of these trials are available, but smaller human studies on the longevity effects of metformin are already being published in the scientific literature. A recent and evocative example appeared in Frontiers in Genetics a few weeks ago.[14] It is a Chinese study, conducted among 32 male diabetics with an average age of 73. Half of the men had taken 500 milligrams of metformin daily for the past five years, the other half had received other diabetes medications.

The researchers extracted cells from the blood of the study participants, isolated the DNA from the cells and then determined whether a number of crucial genes had methyl groups attached to the genes. As people age, the number of methylated genes increases. In a number of genes, the presence of such a methyl group prevents the gene from working fully as it should. The accumulation of methylated genes thus says something about the biological aging of an organism. It says something about the wear and tear of the genetic material.

The researchers used three different tests to map the genetic aging of the study participants. The tests were developed by Steve Horvath[15], Gregory Hannum[16] and Morgan Levine[17] (DNAm PhenoAge). The difference between the tests lies in the genes whose tests determine the methylation.

According to all tests, the metformin users had fewer methylated genes than the subjects who had not taken metformin. In Horvath and Hannum’s tests, the differences were statistically significant, but not in Levine’s test.

The Chinese study, as interesting as it is, doesn’t provide hard evidence. It suggests that metformin mag prolong life, that’s all. But the beginning is here.