On the world wide web, thousands of web shops sell a carbon molecule that British chemists, experimenting with laser technology, discovered by accident in the 1980s. The British called this molecule Carbon 60 (C60) and, according a well-known animal study, it is capable of doubling lifespan. However, another and less well-known animal study suggests that C60 may actually do the opposite.

Most hypes in the wonderful world of nutritional supplements last a few months, and very rarely a few years. This is certainly not the case with the hype around C60, which already started in 2012, the year in which French scientists discovered that laboratory animals live almost twice as long if they frequently consume a small amount of C60. Since 2012, the number of webshops selling the weird nanomolecule continues to increase.

C60 is a sphere made up of carbon molecules. You can see the structure below. 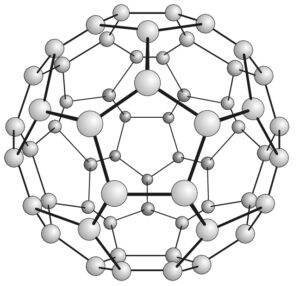 Harry Kroto, at the time a chemist at the University of Sussex in the UK, discovered the molecule when he fired one of the previous lasers at graphite in the 1980s. He discovered that this created countless molecules that were usually made up of 60 carbon atoms that together formed a cage in the shape of a football.[1]

Since the C60 molecules were quite stable, Kroto foresaw all kinds of interesting applications for the molecules he discovered. Perhaps pharmacologists could put drugs in the spheres and use them as a transport vehicle. Few of these possible applications actually materialized, but Kroto’s discovery did give the first generation of nano technologists the inspiration they needed. It is mainly for this reason that Kroto and his close associates were awarded the Nobel Prize in chemistry in 1996.[2]

Of course, before pharmacologists would seriously invest in applications for C60, they had to know whether C60 is safe. In theory, a molecule like C60 could be an antioxidant, protecting cells against aggressive molecules. But C60 could also increase the activity of those same aggressive molecules, the oxygen radicals in the lead. In the latter case, C60 may be to toxic for human use. In the now famous study published in 2012, which marked the start of the C60 hype, researchers from the Université Paris Sud XI wanted to learn more about the toxicity of C60.[5]

In this animal study, research leader Fathi Moussa and first author Tarek Baati gave rats olive oil in which they had dissolved C60. C60 is orally available when dissolved in oil. Every two weeks, the rats were given a dose of C60.

One control group of rats received only olive oil, another control group received nothing at all. The researchers studied the effect of orally administered C60 on the lifespan of the animals. If the rats had been adult humans, they would have consumed roughly 15-20 milligrams of C60 per dose.

C60 extended the life of the test animals by 90 percent, which almost equates to a doubling. “A longer treatment could have generated even longer lifespans”, the researchers wrote in their publication. “Anyway, this work should open the road towards the development of the considerable potential of C60 in the biomedical field.”

Doubts of a chemist

Tens of thousands of companies did not wait for this ‘development of the considerable potential of C60 in the biomedical field’ and started selling C60 supplements. In 2019, Jonathan Hare, a chemist who had worked with Harry Kroto in the 1990s, published an article on the Chemistry World website about his experiences with some of the organizations that sold C60.[6] Hare had developed a process to produce C60 on a lab scale and had been approached by companies asking if he could provide them with his C60 expertise. Kroto himself had passed away in 2016.[7]

Hare decided that for ethical reasons he could not accede to the request, even if it meant losing out on revenue. “It bothers me that C60 can be bought so easily, that there are no ‘stops’ or ‘checks’ in place to remind people that the scientific research is sparse – and that it needs repeating – and that there are no limits to the amount people might decide to ingest,” he wrote.

“Much more research needs to be performed – and, crucially, independently repeated and verified – especially when applying these results for fullerene ingestion by humans.”

Hare has a point. There is still virtually no scientific knowledge about the biological effects of C60 on humans. In addition, some in vitro and animal data suggests that in some circumstances the use of C60 may have negative health effects. One of the most disturbing studies published so far is the animal study that researchers at the State University of New York published in Geroscience in 2021.[8]

To begin with, the American researchers could not confirm the promising results of their French colleagues. Their laboratory animals, on the other hand, no longer lived after being given C60. It should be noted that the method of administration used by the Americans differed from that of the French.

More startling was what happened when the Americans exposed vials of C60 to a lamp that imitated daylight. Almost immediately the C60 molecules started to change.  After 8 days, in an opened vial almost all unmodified C60 had disappeared.

Besides, the modified C60 molecules had acquired dangerous properties. C60 exposed to daylight for 0-2 days was not overtly toxics, but after administration of C60 that had been exposed to longer light, half to a quarter of the test animals died within two weeks. In their bodies, the researchers found ‘numerous adhesions in the intestinal cavity, dilated small intestines, enlarged livers and spleens, and extensive fibrin formation’.

It should be noted that the Americans injected their preparations directly into the small intestines of their lab mice. The doses administered were also significantly higher than the doses used by users of C60 supplements. If the mice had been adult humans, they would have received about 20-30 milligrams of C60. But even with these nuances in mind, the animal study is not reassuring. As a consumer, how can you be sure that the C60 product you have purchased has not been exposed to light?

The chance that you as a consumer will get your hands on such a product is not imaginary. The New Yorkers bought 4 different commercial C60 preparations, analyzed them in their lab – and found in all four of the preparations components that did not belong there. None of the tested preparations was able to eliminate free oxygen radicals in vitro – and there was even one preparation that actually caused oxidative damage…

Maybe Jonathan Hare was more right than he realized.

6. Hare J. Should I help make fullerenes if people are going to eat them? Chemistry World, 7 February 2019.